chris: has been a working fool!!!! in fact he just got called into work- on a monday night! poopers. but as annoying as it is to have my husband whisked away to deal with criminals when all i want to do is watch some tv with the guy, we are so thankful for the overtime! thank you Jesus! and when chris isn’t working, he is being crazy. chris did another triathlon yesterday. this one was a sprint, which means he only exercised for one hour and forty minutes straight, as opposed to the last time when he exercised for three and a half hours in one go. he’s so stinkin crazy! why he does this to himself, and pays people money so that he can do these things- is beyond me. but i had a great time watching him, and his equally crazy brother, robert, racing for no reason. even though we woke up really early to support these boys (and their other crazy friend dan) i had an awesome time hanging out with barb and lindsay. 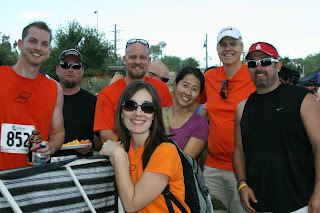 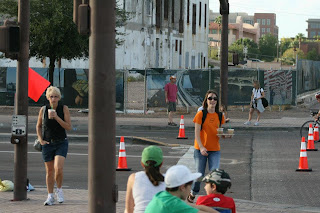 me: i am 32 weeks pregnant and i waddle around like a pissed off duck. it’s not attractive. the day before the triathlon i felt like i had shrapnel in my crotch and couldn’t walk. it was creepy. i am trying to be productive and all that, but i waste a lot of my time playing sudoku while laying down. i had a terrible week last week- my allergies nearly killed me, and i had to take the 3-hour glucose test. i do not have gestational diabetes which is great news, but fasting for 12 hours before the test, and not eating for the 3 hours during the test just about killed me. lots of dramatic ‘near death’ experiences for me last week. (i am becoming weaker and more dramatic as this pregnancy continues…)

lily: she has a new-found love for the asian baby doll she received for her birthday 6 months ago that was supposed to replace ‘Jun Lee’, her creepy asian baby doll that she has had since she turned 1. this new baby doll is now named ‘Mia’ and lily loves putting her to bed and getting her dressed and pulling her hair and swinging her around by her ankles. it is sweet and terrifying to watch. it’s good though because then we have a chance to talk about what is ok and absolutely not ok for her to do with her little sister. here is a video of our latest project- working on the Lord’s prayer. we introduced it to the kids a few weeks ago and they have latched onto it and won’t let go! which is so great. you may have to turn the volume way up. my camera is kinda crazy.

topher: is loving Christian music right now and really pays attention when we are listening to Klove (a Christian radio station). he asks great questions about what he hears and i am just amazed at his brain and heart. the other day ‘Manifesto’ by ‘the City Harmonic’ (a canadian group- happy almost thanksgiving to my canadian friends out there by the way!) came on, and i told the kids that the Lord’s prayer was in it. when that part of the song came on, they were riveted. i actually just purchased the song on iTunes- the only song i have payed for on my iPod! your welcome Apple, use my $.99 wisely… here is topher saying the Lord’s prayer:

i lied. no videos. you can’t really hear the kids. so i will retape em and repost em. maybe tomorrow. we’ll see…

being a mom rocks my socks »