that’s my new name for Mia. it used to be ‘chubby’, cause she was chubby and delicious! but grandma did NOT like that at all, and then Mia lost her chub almost simultaneously, so yeah- it would have been mean to keep calling her that. Mia is 22 months old and she is C.R.A.Z.Y, thus her new name- ‘cray cray’.

yesterday Mia fell down the stairs while holding a little bowl of grapes. I didn’t see it happen, I just heard thuds, some screaming, and a final thud, and a cry. I ran downstairs to console my precious girl and to see if she was ok. she was pretty upset- understandably. but do you know why she was upset? cause she dropped her grapes. she hopped off of my lap to look for her wayward grapes.

then we went to the store today and she saw a baby with his mama and she kept saying she wanted to go and hug the baby. I told her that was kind yet creepy. if we go into a store with mannequins, especially kid mannequins, she needs to hug them  when we walk by. she is such a little lover.

she is hard to be with in public because she loves to RUN. and if I call her name, she thinks I am playing a game and proceeds to run away from me. it’s pretty bad. I have to spank that out of her, but I haven’t yet. cause she’s just a baby… or she’s my youngest… whatever. don’t judge me.

but being at home with her is the best (except when she is tumbling down the stairs). she is fun to be with, she has the sweetest little voice and is learning SO MUCH. some of her sentences are four or five words long! she blows me away. and I can’t even brag or take credit for that cause lily didn’t talk til after she turned two, and topher spoke earlier, but I can’t remember if he spoke in sentences before he turned two. I guess lily and topher can take credit for their little sister trying to be just like them. 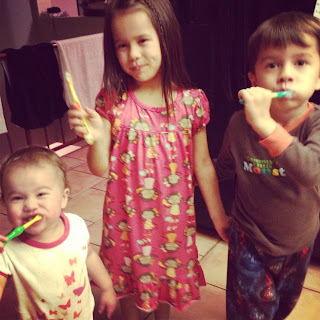 Mia brushing her teeth just like Lily and Topher. She has a tooth coming in so that is contributing to her being Cranky Cray Cray. 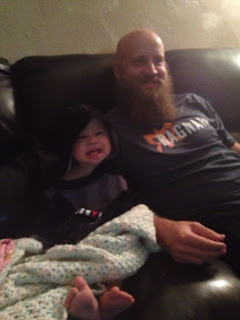 Mia is not aware of the fact that she is wearing a Darth Vader towel, but she is and it’s ridiculously adorable. One day she will just be able to dry off by rolling around in Maurice… 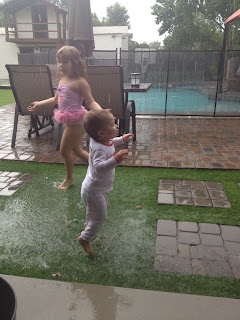 It rained a few times a few weeks ago. it was glorious. it’s still 105 degrees here. not happy about that. but Mia was happy to play in the rain with her friend Maggie. 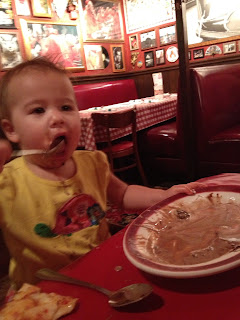 Mia polishing off a plate of ice cream at Bucca Di Beppos. She was also accidentally given a cup of lemonade instead of water. When the mistake was discovered, I gave her a cup of water and she took a sip, and then pushed the cup over to me and said “here you go mama.” as in, ‘give me back my sugary juice.’ 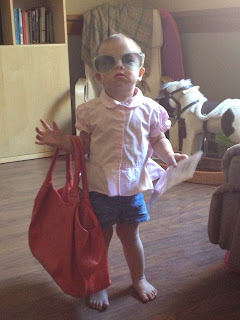 all dolled up with nowhere to go. I love when she puts on sunglasses (which she calls goggles) cause she tilts her face up and puckers her lips to keep the glasses on her face. it accentuates her cray crayness