i didn’t write for topher’s birthday yet, so i will get to that. i also played a prank on my kids for april fool’s, but it was lame. there weren’t even any real tears.
but my kids have been so funny lately so i really need to write this down so i don’t forget how funny they are.

conversation that just happened 5 minutes before bedtime:
-lily and topher are ready for bed, but somehow they get on the subject of exercise and topher drops to the ground and starts planking. he’s on his elbows for a whole second and a half and then stops.
topher: “that really hurts! but there are good hurts and bad hurts. that was a good hurt.”
lily: “i know topher. you already told me that last week.”
apparently my son is already an exercise-obsessed little man.

conversation that happened two weeks ago in the car after i picked the kids up from school:
lily: “what if someone joins our family who is a different color than us?”
me: “that’s ok because we love everyone no matter what color their skin is.”
topher: “just like we love BooBoo (my brother in law James, who is half African-American and half Korean.) And Sungu. (my nephew who is 3/4 Korean and 1/4 African-American).”
me: “yup. just like we love them.”
lily: “yeah, the boys in their family are dark, and the girls (my sister and niece) are light. (which was a good observation) but we are all the same in our family.”
me: “what?…”
topher: “yeah. we are all the same in our family.”
me: “What?? even me and your dad?”

that’s a weird picture. i am not that bright white… terrible picture to prove my point.
anyway, back to the conversation-
me: “so… i guess i just have dark hair, and daddy has blond hair?”
topher: “you have long hair. lily has long hair. mia has short hair- but she’s still a girl. i have short hair, and i am a boy. and daddy has a beard.”
i love that my kids cannot tell the difference between their dad and i.
mia is telling the worst knock knock jokes, because she confuses the main lines with different punch lines.
example:
mia: “knock knock.”
me: “who’s there?”
mia: “b’nana”
me: “banana who?”
mia: “… stop crying baby!”
lily and topher are working on thank you cards from their birthdays. i am trying REALLY hard to be a better person, and to raise my kids to be better people (than me even!). i wrote a script for each of them, and they surprisingly changed roles- lily who usually sticks to what she is told to do- strayed and wrote sweet thank you notes complete with pictures. topher, who usually is very creative, copied the script down to the underlines i used to denote ‘fill in the blank’.
here’s one of my fave cards that i was able to take a picture of: 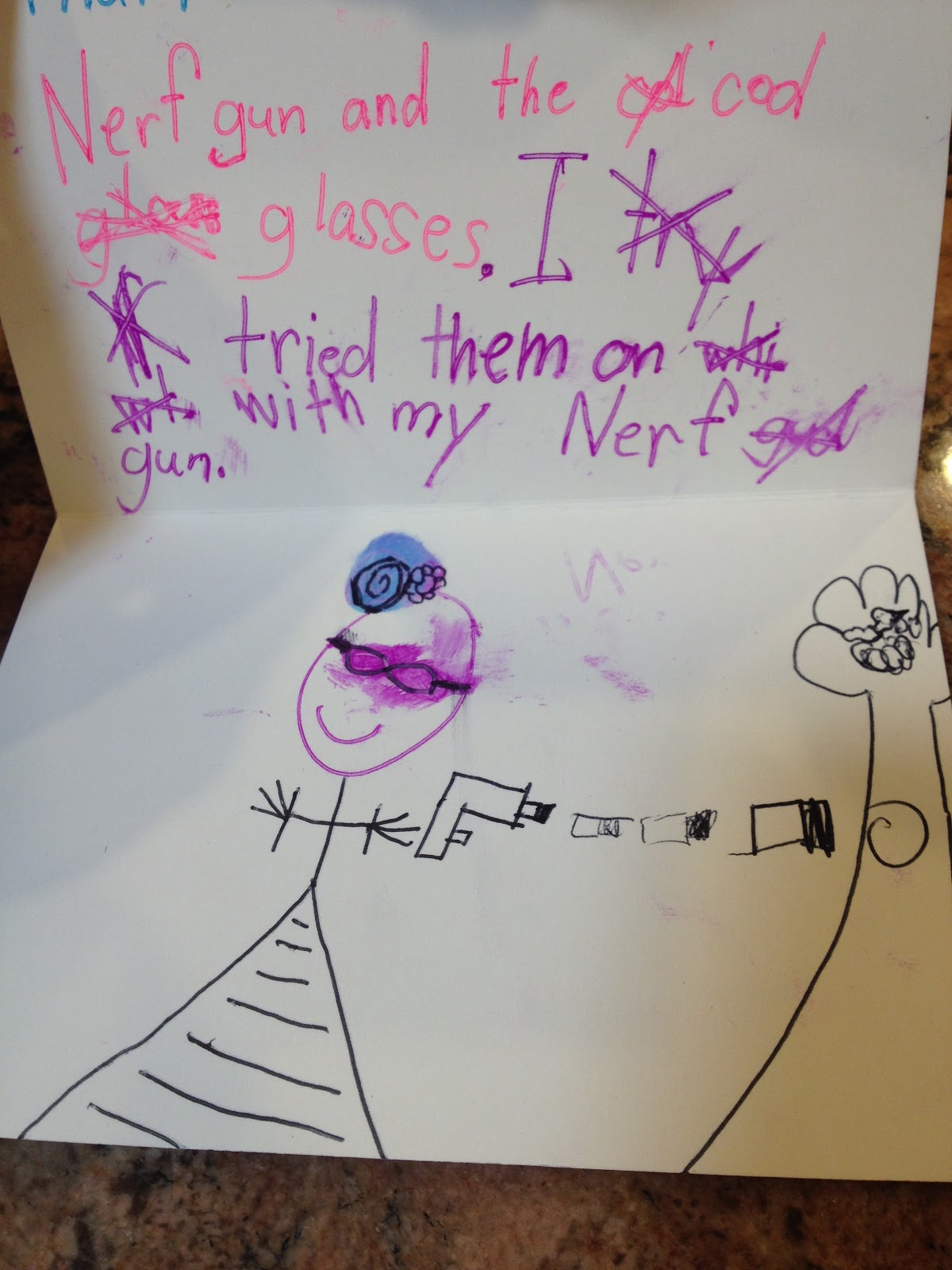 and she had another one to our sweet friends who got her some adorable pajamas. she wrote: “Thank you for the pajamas. I wore them on March 24th.”
in case you were worried that she wasn’t going to use the gift you gave her- lily will tell you what day she used it.
my kids. i love them so much! they are so funny and make the tantrums, disobedience, selfishness, and all around madness totally worth it.